Bridge Command 5.5.3 has been released for macOS, in addition to Windows and Linux as described below.

Bridge Command 5.5.3 has been released for Windows and Linux, including Raspberry Pi. The main work since the last release has been in increasing the performance, particularly for slower computers.

Note that the details of the network messages have changed, so Bridge Command must be updated to version 5.5 for all computers in a multi-computer simulation.

The MacOS build will be updated shortly.

Following work to profile and improve the performance on Raspberry Pi, an alpha version is available for testing. This is available as a .deb package for installation on Raspbian/Raspberry Pi OS, or any other Debian based OS.

As it is possible to drive two screens from a single Raspberry Pi 4, this offers a route to a low cost panoramic simulator.

A more detailed tutorial will be prepared in due course, but please let me know any feedback by email (james@bridgecommand.co.uk) or via the Forum if it works, or if you have problems.

16th November 2020: Alpha version for testing if you have an AIS feed

This version is described in detail at Testing - AIS_Data. This version allows you to replay live traffic into Bridge Command, if you have access to a raw AIS feed. This is an alpha version for testing!

5.4.7 had a bug where any world model with land lights would not load. This is resolved in 5.4.8, as well as a higher default resolution for the radar.

A new update has been released for all platforms. This adds:

Current development efforts include adding new sea areas, such as Portsmouth, and allowing live AIS data streams to be used to include real world ship movements in the simulation.

Bridge Command has been built for Raspberry Pi, and it is available as a deb package for easy installation. This requires OpenGL, supported by default on the Pi 4. It hasn't been tested on earlier versions, so any feedback is useful.

Please provide feedback via the forum or email if you run on a Raspberry Pi.

This version allows users of the VRInsight Ship Console to use this with Bridge Command. Different users have reported that the following channels work:

Please let me know any success or problems.

In addition, a radar bug has been fixed, where land contacts below the height of the radar scanner were never shown.

Please provide any feedback via the forum. Please find the packages on the download page.

This is a speed improvement version, which is otherwise the same as 5.4.1, but avoids repeated filesystem access while running. Many thanks to ceeac for contributing this via GitHub. Additionally, a macOS/OSX app and Linux .deb packages have been built for this version. Please provide any feedback via the forum. Please find the packages on the download page.

This is a small bugfix release to remove a black line that sometimes appears at the horizon.

Bridge Command 5.4 has been released for Windows. Builds for OSX and Linux will follow in the next few weeks. Please visit the Download page for the installer.

Bridge Command 5.3 has been released for Windows. This includes:

At present this has been built for Windows only. Linux and OSX versions will be released in due course, but the code is available as always at https://github.com/bridgecommand/bc with instructions for compiling.

Bridge Command 5.2 has been released for Windows. This fixes a significant bug where night time navigation lights went dark after a few minutes.

At present this has been built for Windows only. Linux and OSX versions will be released in due course, but the code is available as always at https://github.com/bridgecommand/bc with instructions for compiling.

Bridge Command 5.1 has been released for Windows. This includes quite a few improvements and fixes:

At present this has been built for Windows only. Linux and OSX versions will be released in due course, but the code is available as always at https://github.com/bridgecommand/bc.

Bridge Command 5.0 has been released for Windows, OSX and Linux. Bridge Command 5.0 and will be the start of a new phase of development. It is a complete re-write of the program, and therefore there are some differences, although compatibility has been maintained as much as possible.

The key difference is that the world model heightmap format has changed, so if you have developed your own world area, please see the documentation on the world file format (included in the download). 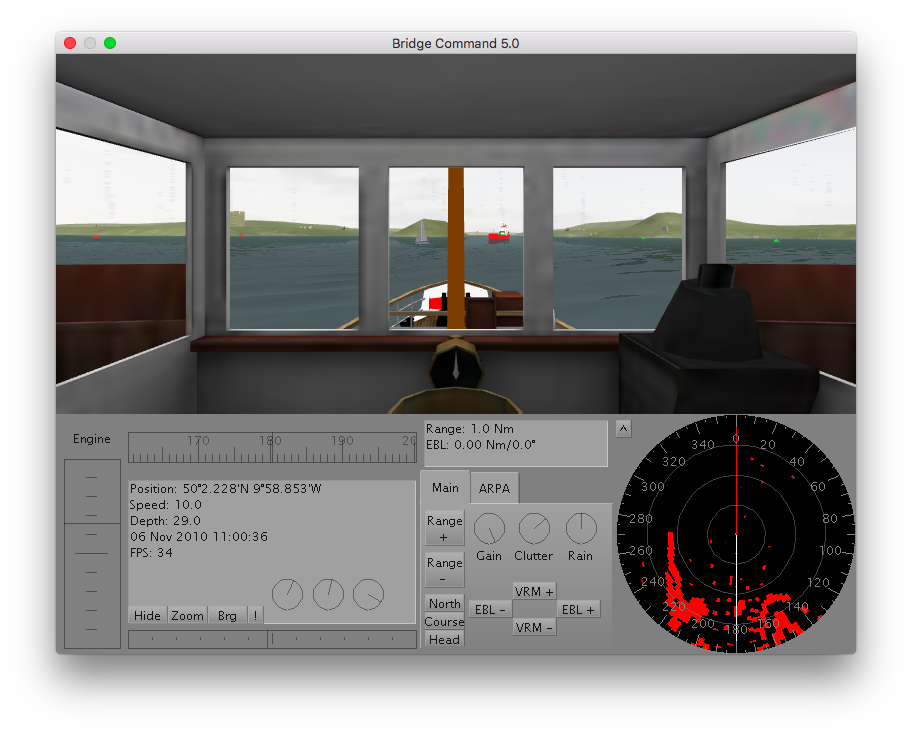 Current work is focussing on the water/wave simulation, and is based on Keith Lantz's ocean simulation code. There is still work do do, but initial results look promising. 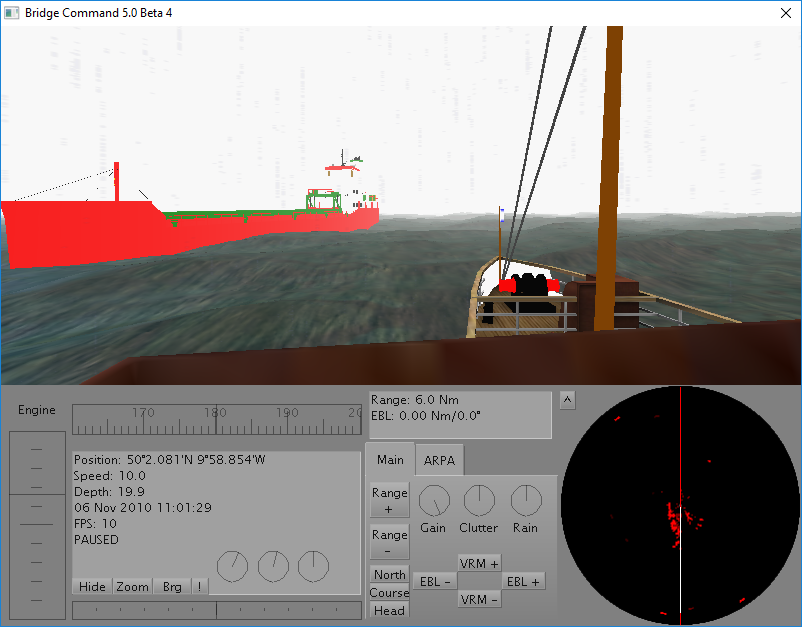 Bridge Command 5.0 beta 4 has been released for testing, and is available from the download page.

Significant development is continuing on Bridge Command 5, with the main focus being on the radar, implementing north up, course up and head up modes, as well as the ability to switch to a full screen radar from the combined view. ARPA simulation is being developed, with the basic simulation working well, and work continuing on the user interface. 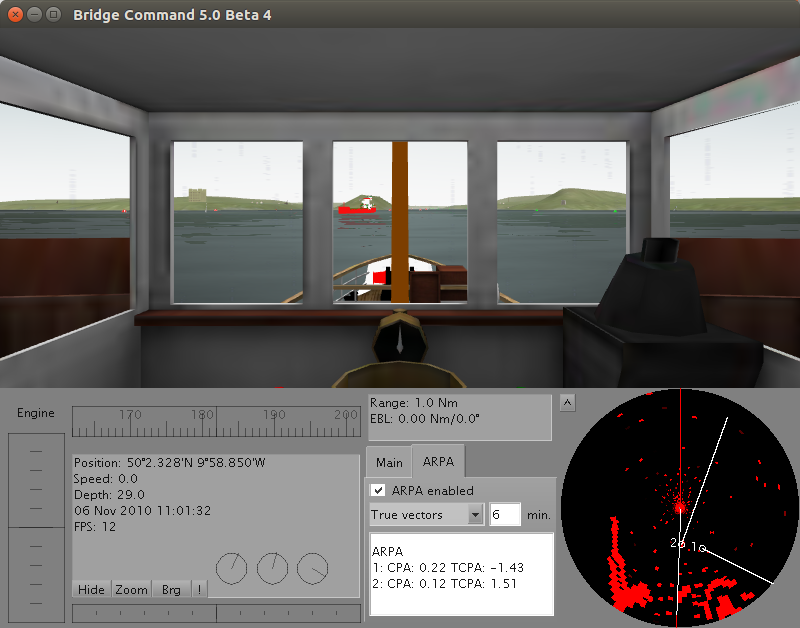 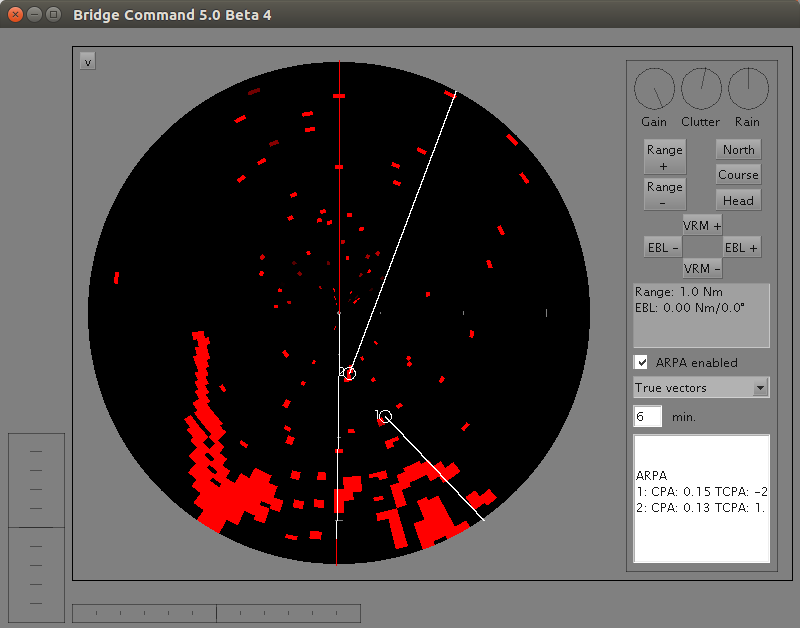 Bridge Command 5.0 beta 3 has been released for testing for Windows, Apple OSX and Linux. The main changes are user interface improvements for engine, rudder and radar controls, and a multiplayer mode has been implemented. To test the multiplayer mode, please follow the instructions at Version_5.0_Multiplayer. 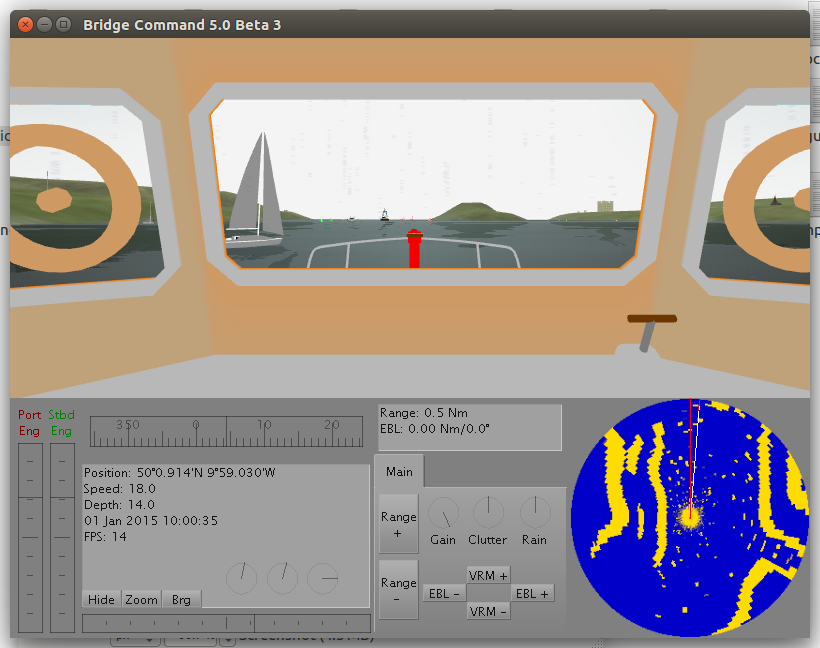 An update to the Beta is available for testing. This includes a new settings editor, and should fix a problem with the map based programs (scenario editor, controller), where the background map was not cleared properly between updates. 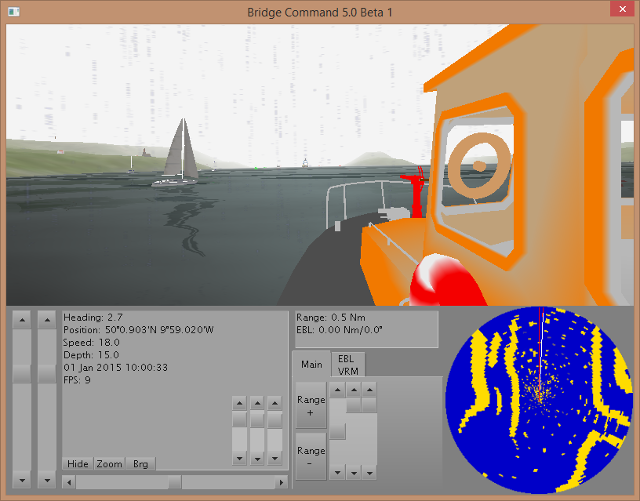 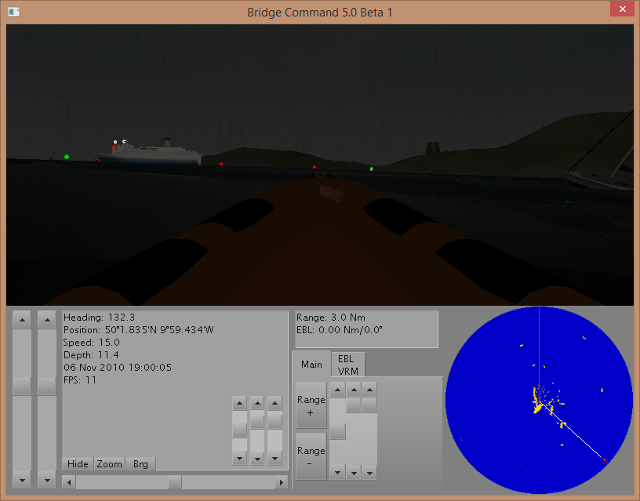 The sixth Alpha version of Bridge Command has been released. This includes a Mac OSX app version for the first time, in addition to the Windows installer.

The fifth Alpha version of Bridge Command has been released. This is a minor update on alpha 4, including additionally

The fourth Alpha version of Bridge Command 5.0 has been released.

This fixes the crash in the launcher program for Windows, includes secondary display mode for panoramic views, as well as basic collision and grounding detection.

Bridge Command 5 has now been tested successfully on Mac OSX, meaning that the version in development can now run on Apple, Windows and Linux computers. In parallel, development continues on the final features before an initial beta release, expected in around a month from now. 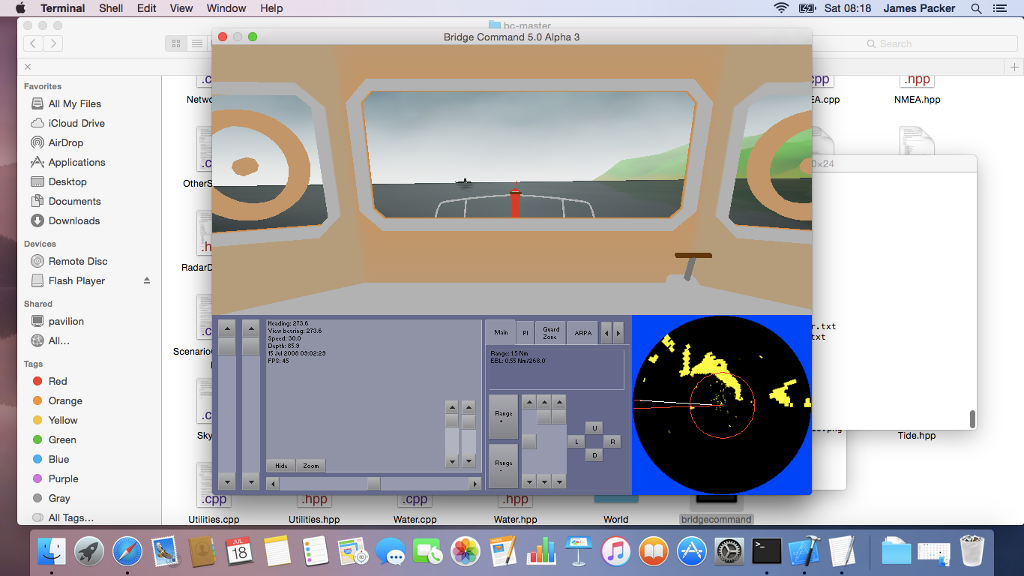 The full version of Bridge Command 4.7 has been released. This is a minor update, which includes:

In parallel, development continues with version 5.0. Source code for this is hosted at https://github.com/bridgecommand/bc, and now fully compiles and runs on both Windows and Linux.

The third alpha version of Bridge Command 5.0 has been released, including GPS emulation for use with a chart plotter, joystick support for rudder and engine controls, and a networked controller program, so an instructor can control the behaviour of other ships in the simulation. If you download this, please provide feedback in the forum. You can download this on the Download page.

Development continues on Bridge Command 5.0, with emulation of GPS (NMEA over serial) implemented, and work continuing on the networking and the controller program. 'Other ships' and 'Controlled ships' will be merged, using the controller to change the current and future route of 'Other ships' as the scenario develops. Version 4.7 of the current implementation will be released shortly. This includes a collection of minor updates including:

The second alpha version of Bridge Command 5.0 has been released, including the basic radar controls, a new water simulation, and the overall interface set up. You can download this on the Download page. 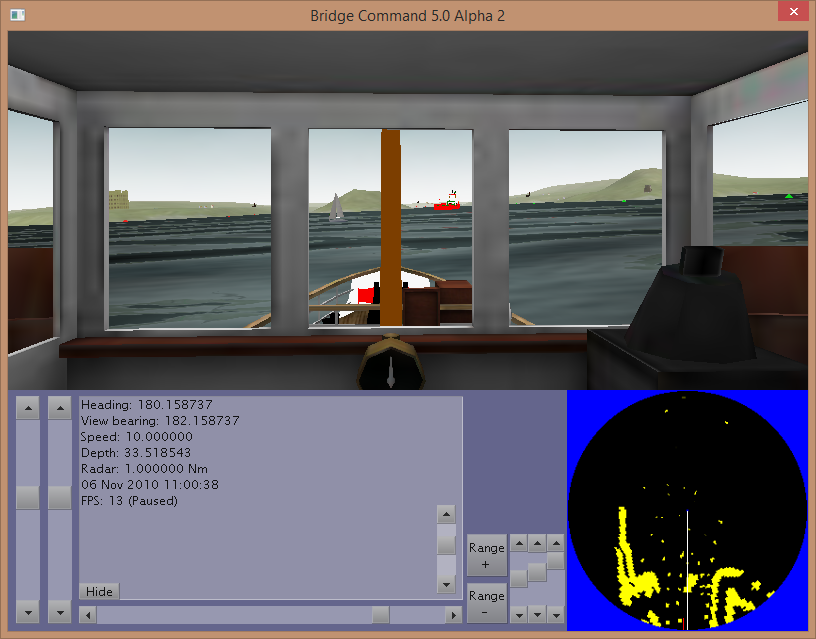 In other news, Blitz3D has now been released as an open source product, so users who want to make modifications to Bridge Command 4.6 can use this freely: See the Blitz3D section on http://www.blitzbasic.com/Products/_index_.php

Development continues, including work on the interface, and the basic radar features implemented (range, gain, clutter and rain clutter controls). In addition, a more realistic sea is being developed (based on https://github.com/elvman/RealisticWaterSceneNode). A second alpha release containing these features should be released in the next few weeks. 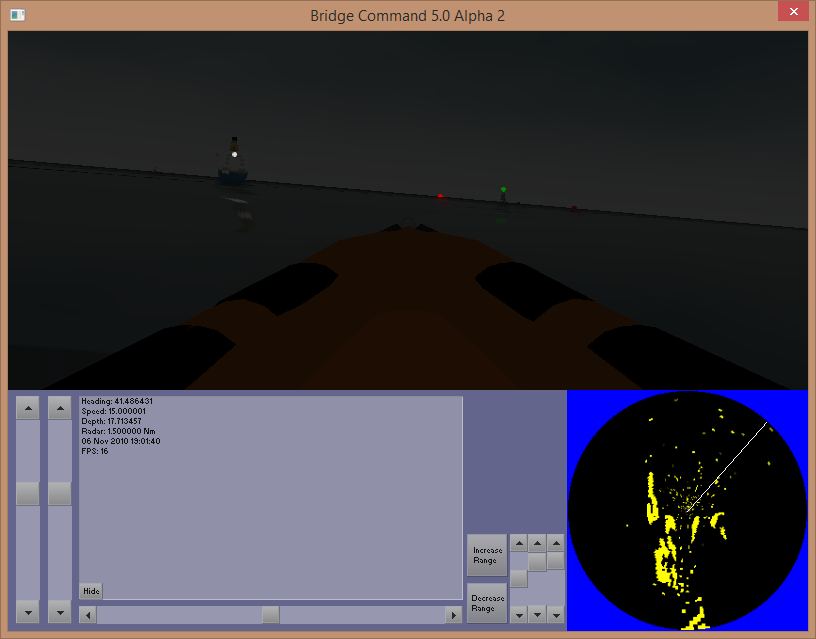 The initial Alpha (incomplete) version of Bridge Command 5.0 has been released. This has been compiled for Windows, but uses cross platform libraries, and should be compatible with Windows, Linux and Mac OS. This is an early alpha release, and does not include networking for instructor control or multiple screens, and has a basic user interface and radar simulation. Work continues on these areas, and will then move into improving the realism of the graphics and ship behaviour, as well as general optimisation of speed and other areas.

This release is primarily aimed at developers. If you are more interested in using Bridge Command's features, please use version 4.6. The alpha version can be downloaded here. 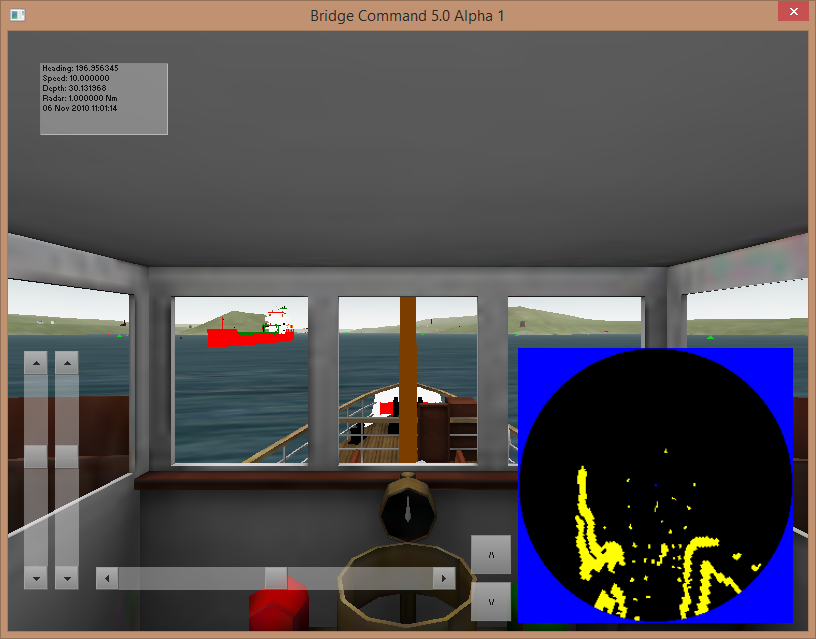 Work on the cross-platform version continues steadily, with work on the very first stages of radar simulation and scenario loading. 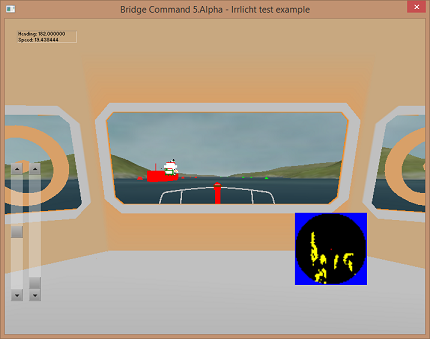 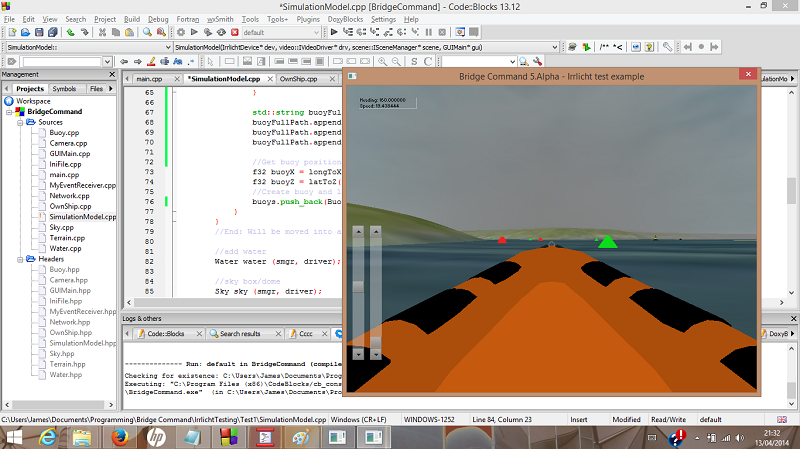 The new version is being developed in C++, using the Irrlicht engine, and will run on Windows, Linux and Mac OS X. In addition, the aim is to significantly improve the simulation graphics and realism.

The full version of Bridge Command 4.6 has been released. This includes

The development (Beta) version of Bridge Command 4.6 has been released.

Bridge Command 4.5 has been released. This includes:

Bridge Command 4.5 in use with full screen radar display and panoramic view

One feature currently being developed is the emulation of a GPS NMEA data, so Bridge Command can be used with an electronic chartplotter. As an example, this is Bridge Command being tested with OpenCPN:

Development work is currently underway on sailing simulation in Bridge Command, and 'two player' simulation, with two users controlling their own vessels in the same scenario. 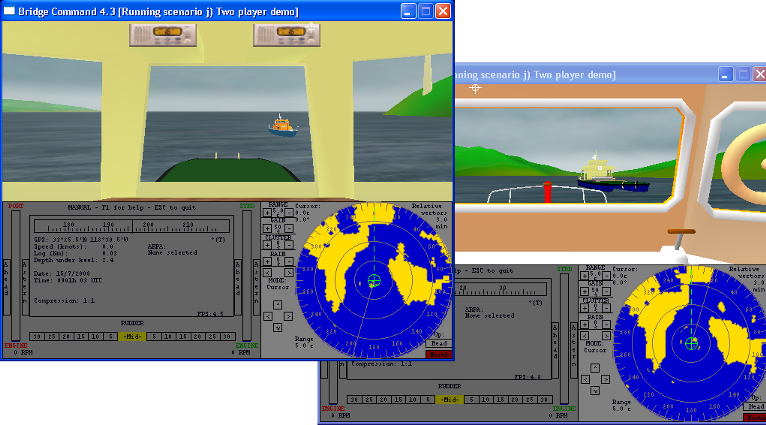 Bridge Command 4.4 has been released, with continued improvement in radar simulation, including an enhanced radar model and realistic scan rate.

Bridge Command 4.3 has been released.

Bridge Command 4.2 has been released.

This contains a number of significant new features, including:

Current work being carried out on includes:

Bridge Command 4.1 has been released.

This contains a number of significant new features, including:

Development continues steadily, with some of the key points being:

For a preview of some of these features, see the bottom of the features page. It is likely a Bridge Command release containing these new features will be available in the first quarter of 2010.

A bug affecting the communication between Bridge Command and the Map Controller program, when used together, has been fixed.

Bridge Command 4.0 has been released as open source software, under the GPL. This release contains major enhancements in almost all areas over previous releases. These include the ability to control the behaviour of other ships in a scenario from another computer, general usability enhancements, improvements in the graphics, and a full set of documentation.

Bridge Command development continues, and Bridge Command now provides the software for the Albatross Bridge Simulator at CAPACITACION CICERON LTDA, which has been inspected by the Chilean Navy, and found to accomplish the STCW standards to provide training in the following IMO model courses: 1.07 and 1.08 and it was elevated to the following category: FULL MISSION SIMULATOR. Congratulations to Sergio Fuentes Fernandez for achieving this status for a bridge simulator powered by Bridge Command.

Development of Bridge Command has now restarted actively. Some of the new features to be released soon include a control programme to run scenarios interactively - The scenario running on one computer and the controlling programme on another, which can set the speeds and directions of the other ships in the scenario.

Also added are fog for more realistic visibility at sea, the ability to use an external set of throttles and a wheel to control your own ship, as well as many other enhancements.

Look out for the release in the next few weeks. A preview is shown in the screenshot at the top of these pages.